This famous line from the hot-headed rival of Jimmy Woods, on one of the most beloved movies in the 1980’s “The Wizard” was portrayed by none other than Jackey Vinson.

Where is he now? Why did he suddenly disappear in the industry?

Before we get into the details, let’s dig deeper for some quick introduction with our blue-eyed topic for today.

Jackey Vinson was born on May 16, 1976. He is an American actor known for starring in various movies in late 80’s and early 90s who was one of the anticipated child actors in the United States at that time.

The 1989 famous movie and as what they call the “90-minute Nintendo ad” starred child actors including Fred Savage, Luke Edwards, and Jenny Lewis.

Vinson played as Lucas Barton, an arrogant and haughty kid who is the rival of Jimmy Brooks when it comes to playing different types of video games.

He was the perpetrator of the line in the beginning of this article. Which up until now, still serves as a living meme in social media.

His character sports the coolest and “baddest” game accessory at that time – The Power Glove. You can check the picture below and see if you can agree if that accessory seems cool for you!

Keep reading to know more about his career!

Here’s a few of his Acting and Movie gigs.

A year after the success of “The Wizard”, Vinson landed a spot in NBC channel’s American sitcom Series “Grand” directed by Michael Leeson. This has a comedic genre just like the movie he participated in the past year, but more like soap opera and satire.

He plays the role of Dylan, one of the Smithson’s, who is from a middle-class family. Though he is not a regular in the series, he was able to appear in a total of 4 episodes which are the titles Blow Off, Legends of Sport, Faded Genes and A Boy and His Dad.

Now, his portrayal here is rather short. He was the young version of one of the protagonists of the show named Gene Michaels.

This film was about a man who has cancer (portrayed by Jason Bateman), who wants his friends to make up before his time comes. He told his friends his dying wish – to go to Los Angeles and be a contestant of a television show called Jeopardy. And so they did!

Vinson also appeared on episode 9 of the American police procedural and legal drama television series Law and Order aired in 1996. Now this is a different genre and was one of the best opportunities given to Vinson to showcase his skills.

He portrayed as Matt Hastings, an anti-Semitic student who was accused of killing a Jewish female teacher.

He and his lawyer fought in defense in court that the motives presented are not enough evidence to prove that he is guilty. Thus, claiming that he was a victim of the Jewish Conspiracy.

Trivia: Anti-Semitism is term for the hostility, prejudice, and discrimination against Jews.

He was able to be casted on numerous movies and series. He seems to be a regular and a promising act in the 1990s. However, after those shows and appearances, he does not seem to maintain his slot in the spotlight.

Though no one ever expected a sudden turn of events that will make his name famous again- BUT in a negative way.

In 2004, his name resurfaced in the social media as he was arrested and had to register as a Sex Offender. He had been sentenced on probation for child molestation for 10 years that ended in 2014.

The information about the case is not very specific and not very detailed on the website. But the fact that he was registered on the Sex Offender Registry on his state already means he had done something terrible. You can check some details below: 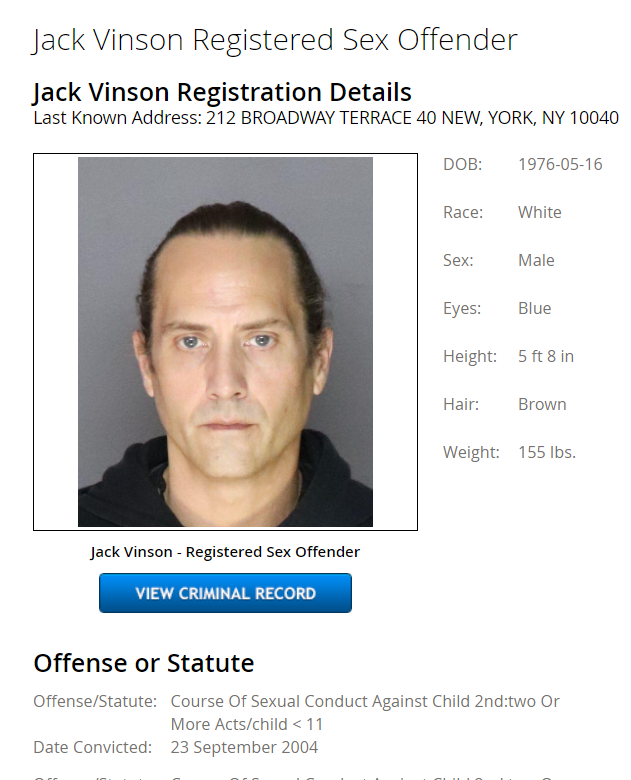 It is quite refreshing to know that after what he did, he was not given or had any chance to go back to the industry.

Let’s be honest, there are lots of personalities all over the world, including Hollywood celebrities, with their own share of cases like this. But most of the time, they act as if it is nothing. And was still given roles in movies and series.

Well, I do not want to drop some names, but you know who I meant, right?

When it comes to Jackey Vinson, he has been inactive for more than 10 years now and shows no signs of coming back. He was surely once a boy who became relevant to the 90’s childhood, but he also had served as a lesson to everyone that whoever you are, you can never escape the law and justice.